Place Of Inspiration
Home Others Firefox OS Apps Developing Environment Setup For Beginners
In this article for who want to develop Firefox OS apps . Here is Firefox OS Apps Developing Environment Setup Guide .  and about to know whats is Firefox OS And Diagram To start Developing You must Know this….
What is Firefox OS
Firefox OS is a Linux kernel-based open-source operating system for smartphones and tablet and is set to be used on smart TVs.
Firefox OS is designed to provide a complete community-based alternative system for mobile devices, using open standards and approaches such as HTML5 applications, JavaScript, a robust privilege model, open web APIs to communicate directly with cellphone hardware,and application marketplace. As such, it competes with commercially developed operating systems such as Apple’s iOS, Google’s Android, Microsoft’s Windows Phone as well as other community-based open source systems such as Ubuntu Touch.
Firefox OS architecture diagram 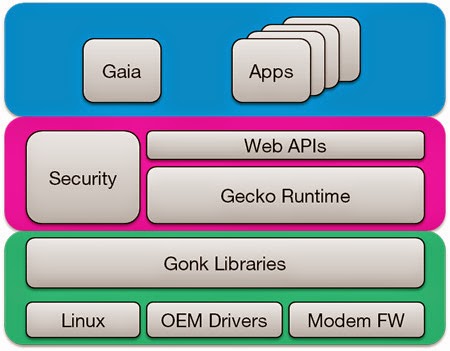 More Details : Firefox OS architecture https://developer.mozilla.org/en-US/Firefox_OS/Platform/Architecture
System requirements
To develop and debug apps using the WebIDE, all you need is Firefox version 33 or later. To test on a real Firefox OS device, you need a device running Firefox OS 1.2 or later, and a USB cable.
App Manager
The App Manager is a tool for Firefox Desktop which provides a number of useful tools to help developers test, deploy and debug HTML5 web apps on Firefox OS phones & Simulator, directly from Firefox browser.
To Open App Manager on Firefox simply
Open the App Manager (in the URL bar, type about:app-manager) Or
Click Open Menu > Developer > App Managers 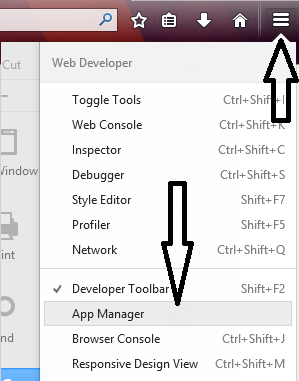 An Apps panel, which manages local apps (app source code located on your computer) and apps hosted externally, allowing you to package and install them on your device or simulator, and debug them using Toolboxes.

Setup your Firefox OS device
Make sure you have Firefox Desktop 26+ installed
Install the Firefox OS Simulator
Install Here : https://ftp.mozilla.org/pub/mozilla.org/labs/fxos-simulator/
After Install this Addons In App Manager’s bottom toolbar, click on Start Simulator, then click on the name of the installed simulator, which should appear there.

Install ADB helper
The process uses the Android Debug Bridge (ADB) to handle the device-computer connection and communication.
Let Firefox handle ADB (recommended). Install the ADB Helper add-on, which makes the process easier. With this installed, there’s no need to install the ADB, and no need to type the adb forward command: everything is handled by the add-on.
https://ftp.mozilla.org/pub/mozilla.org/labs/fxos-simulator/
Connecting your device to the App Manager
With all your configuration done, it’s now time to plug your device into your computer and start the App Manager:
At the bottom of the App Manager tab, you will see a connection status bar (see screenshot below). You should be able to connect your device by clicking the “Connect to localhost:6000” button.

Now that everything is working, let’s review the functionality available inside the App Manager, starting with the Apps panel 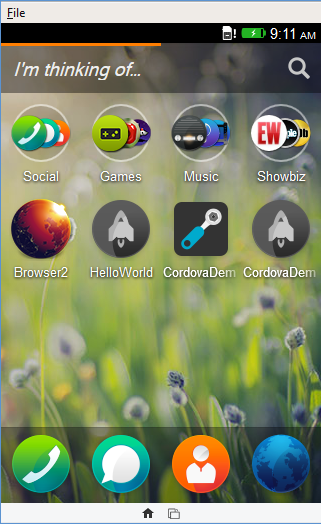 Actionable Ways To Boost Sales For Your Cannabis Retail Store A Guide to Designing Websites Without Knowing How To Code